A number of events has changed the habitual approach to Iran: a surprise victory of the most moderate candidate Hassan Rohani in Iran’s presidential vote in June 2013; a historic phone call from the new Iranian president to his U.S. counterpart Barack Obama in September; the Geneva interim agreement on the Iranian nuclear programme between Iran and the P5 + 1 (China, U.S., Russia, France, United Kingdom + Germany) in November of the same year. Everything, at the end of 2013, seemed to indicate that a hitherto taboo reconciliation had been initiated between the U.S. and Iran.

Even more surprising, despite 35 years of mutual demonization, many observers – including Americans, Europeans but also Iranians – interpreted this opening as inescapable.

However, beyond the internal and external resistance to reconcile that exists in both countries, it is the recent events in Ukraine and the rise of Russia that collaterally threaten U.S.-Iran normalization. 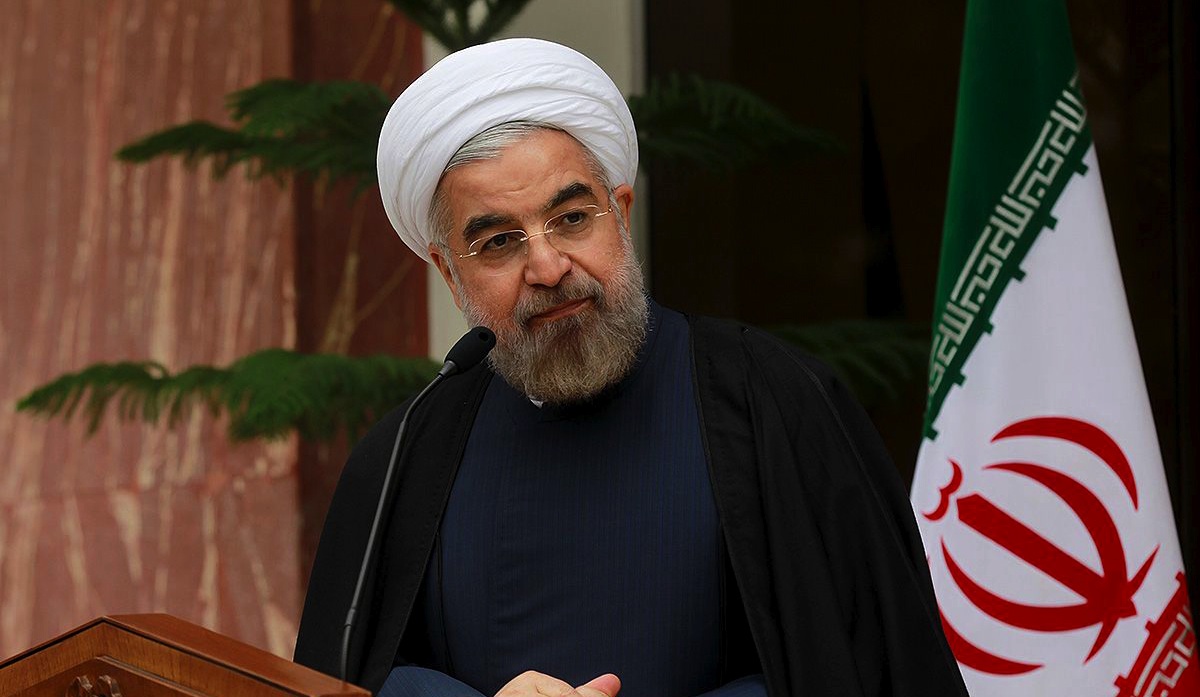 Hassan Rohani, the Iranian president at a press conference in Teheran in November 2013 © Xinhua / Allpix Press

An end to the demonization of Iran

In September 2013, on the eve of the Iranian president’s eagerly awaited speech to the United Nations General Assembly, Mehdi Ayati, a columnist of the Iranian reformist daily Arman hoped that the possible meeting between « Hassan Rohani and Barack Hussein Obama » would « bring about fundamental changes in the relations between Iran and the United States ». The meeting did not take place. But the Geneva agreement on the Iranian nuclear programme signed in November embodied in a much more concrete way the beginning of a possible change, revealing a much more proactive and open attitude from Teheran. The agreement came into force in January 2014 for an initial period of 6 months. Its objective is to restore confidence and, ultimately, permanently lift economic sanctions on Iran.

Iran’s motivation and the issues at stake thus go far beyond the framework of a nuclear agreement. Iran wants to rebuild trust and aspires to become a « normal » political and economic actor again, at both the regional and international levels. In his 2013 work Iran – United State: Friends tomorrow or after-Ahmadinejad, Mr. Ardavan Amir-Aslani not only considers that Rohani’s election undoubtedly fits into this context but that a U.S.-Iran reconciliation is inevitable : « Iranians have to get along with the United States, notably to put an end to economic sanctions and regain their rightful place in the community of nations. »

In Amir-Aslani’s view, Rohani’s election is largely due to Iranians under 40 years of age who represent 70 percent of the population (unverified figure, Ed.). It is these Iranians who are educated, open on the world and aspiring to a secular lifestyle who voted in their vast majority for Rohani. They did so despite the fact that he was the least favoured candidate by those in power and although he was in total opposition to his predecessor Ahmadinejad. Ardavan Amir-Aslani is convinced that Iran’s political regime can reform from within. The 2013 elections are a clear demonstration of this option: « those in power cannot ignore the Iranians’ will ».

More fundamentally, the Iranian people feel culturally very close to the American way of life. It is in the U.S. that the Iranian diaspora is the largest. Barack Obama clearly understands this when he addresses an annual message to all the Iranians in the world on the occasion of Nowruz, the Persian New Year.

While Iran’s role as a key regional and international actor has been knowingly disregarded until now, particularly by Washington, a collective awareness has emerged: the main threat to the region lies much more in its instability than in Iran’s nuclear programme. For the Americans therefore, the challenge of a renewed Iranian legitimacy resides in its geostrategic capacity of playing a stabilizing role in the Persian Gulf, the Middle East as well as in Southeast Asia.

Beyond Iran’s wealth making it a de facto key player in the international relations system, Teheran could foster U.S. interests in these regions. Americans have a direct interest in a thaw in relations with a country that no longer belongs to the « axis of evil ». Dr. Nasser H Saidi, economist and advisor to central banks, considers that only a « Pax Americana-Irania » can lead to a stabilization of the situation in Iraq, Afghanistan and Pakistan. This new balance can also help resolve the Israel-Palestinian conflict and prevent Syria from turning into a failed state with deeply destabilizing effects in the region.

Another determining factor lies in Iran’s geostrategic position, all the more uncontestable in that it lies exactly where pipelines are increasingly radiating from the Caspian region to the Mediterranean, the Black Sea and the Indian Ocean.

Opponents to the U.S.-Iran reconciliation

On the regional stage, any step towards a thaw between Iran and the U.S. generates distrust, if not outright opposition. When at the beginning of May, Israel’s Prime Minister, Benjamin Netanyahu, stated that « the Iranian threat impeded any advances in the peace process », he was directly connecting the nuclear issue and the détente between the West and Iran to the Israeli-Palestinian negotiations.

The U.S.-Iran rapprochement worries other regional powers as well. They view any increase in Teheran’s influence as a detriment, if not a threat. In October 2013, Reuters quoted Abdullah al-Askar, Chairman of Saudi Arabia’s Foreign Affairs Committee, as saying « if America and Iran reach an understanding, it may be at the cost of the Arab world and the Gulf states, particularly Saudi Arabia. » That said, what sometimes amounts to political posturing in no way prevents these countries’ chancelleries from meeting and talking.

Opponents to a change in Iran’s international status and an increased understanding between the two countries are however also to be found in their respective internal oppositions. While it appears that a political consensus does exist among the Iranian political establishment about ending the U.S.-led economic sanctions targeting the country’s economy, there are those within the establishment who are ultimately opposed to Rohani either due to personal, political, or ideological differences. The most conservative fear that the nuclear deal is only the beginning of a deeper process directly leading to alterations in the political structure of Iran itself.

Just as in Teheran, in Washington there are opponents to any form of agreement or opening of negotiations with Iran. Even if more vehement on the Republican side, this resistance largely cuts across the political spectrum and the division between Democrats and Republicans. Lobbies that defend foreign interests, notably Saudi and Israeli interests, equally take a hard line against Iran. Collectively, this opposition and those pressure groups can truly undermine an opening towards which Obama seems yet to be in favour.

Aware of the strategic challenge at hand, the U.S. president faces an increasingly determined opposition including members from his own party. In January 2014, he had to threaten to veto the project of a bipartisan bill supporting new sanctions on Iran should the country break the interim deal on its nuclear programme. It is all the more urgent for Obama to move closer to Iran that his already narrow manoeuvring room might shrink even further in the November midterm elections. Republicans are already threatening to use his outstretched hand to Teheran as a campaign argument against the Democrats.

An Iran-Russia axis: an alternative to the U.S.-Iran rapprochement?

While the first steps towards the normalization of U.S.-Iran relationships have now been taken – the Geneva agreement being its most concrete manifestation – it is paradoxically the Ukrainian crisis that could bring this new beginning to an end. For several months now, Moscow and Teheran have indeed been discussing a barter deal that would see Moscow buy up to 500,000 barrels a day of Iranian oil in exchange for Russian equipment and goods.

Qualified as « oil-for-goods » by those Europeans and Americans seeking to disparage Iran, this potential agreement has been very badly received by Washington. Oil-for-goods ironically refers to the United Nations programme officially intended to limit the impact on the Iraqi people of sanctions targeting Saddam Hussein.

The deal between Iran and the U.S. is only at the discussion stage, but its success – or failure – will reveal Russian foreign policy choices. Prior to the annexation of Crimea, the Kremlin gave priority to the international agreement on Iran’s nuclear programme over the oil-for-goods deal. Such a deal would raise « serious concerns », the White House said, and could jeopardize nuclear talks between world powers and Iran.

The possible Russian-Iranian deal actually unveils a cooperation of a strategic depth that goes far beyond a simple commercial arrangement: both countries have an objective interest in an alliance. Growing tensions on Ukraine between the « West » and Russia could push Moscow to use the Geneva agreement to gain leverage vis-à-vis Europe and the U.S.

From Teheran’s perspective, its own interest is to draw closer to Russia to reduce, or at least ease, the constraints imposed on its nuclear programme by Geneva.

Furthermore, not only do Iran and Russia seek to become influential actors in the Middle East, and more generally at the international level, but both also share the perception of being misunderstood by, and excluded from, the international community. Common objectives, of which Syria is a decisive example, as well as a shared feeling of « vexation » may lead these two countries to unite in a confrontational stance against both Europe and the U.S. From this perspective the U.S.-Iran reconciliation seems far from certain.

The way in which the initial phase of the Geneva agreement is concluded in June will be a deciding factor as to whether Iran is to resume its central place amongst the « community of nations » or if it takes sides on what seems to be a new cold war.

A campaign for social change lead by the women of Iran is taking social media by storm. The selfie has become a vehicle for political rebellion as women shed their hijabs and post their photos on Facebook.
Arsalan Fleury