Tomorrow, Iran meets already relegated Bosnia-Herzegovina and a victory can lead the Iranian team to the second round of the World Cup. I will be glued to my TV, feeling Iranian: during 90 minutes politics, sanctions and nuclear talks will all disappear… 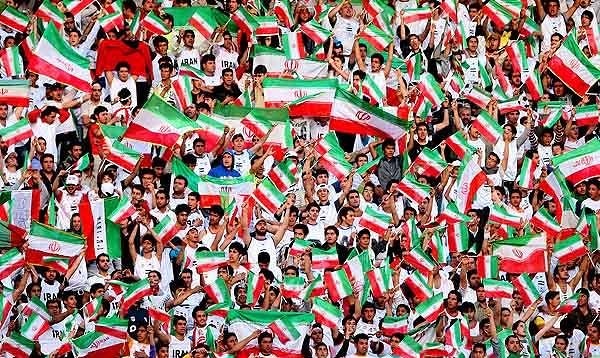 The image of a vast soccer field illuminated the wall, lighting up the dozens of eager faces. Every pair of eyes was focused on the white-clad players sprinting after the soccer ball. I nibbled on my pistachios while my mom enthusiastically greeted our many relatives and friends in the crowd, but the clamor soon died down as the game intensified. It’s not everyday that Iran makes its way to the FIFA World Cup and nearly every Iranian in town had gathered to watch our first game against Nigeria. The room fell quiet as the Nigerians were in possession and sped towards the Iranian goal post. Suddenly, everything went wild. The whole room was on their feet cheering, clapping, and hugging anyone in reach as the Iranian goalie blocked the goal and sent the ball back into center field.

The World Cup presents a unique moment of harmony within and between cultures and reminds us of whom we really are: people. I saw the complicated names of the Iranian players, remembering the difficulty of teaching my friends to pronounce my own name. I recognized the large noses and thick bundles of black hair, the defining factors of a true Persian. I smiled because I knew that my family all over the world, driven apart by the diaspora, was watching the same game at that very moment. These players, representing Iran at this major international event, were people I could relate to.

Following the major exodus of Iranians to the West after the 1979 revolution, Persian communities have evolved all throughout the world in an attempt to create a new home and preserve an ancient culture. The life of expatriates is not without difficulty, with family and friends scattered across the globe it can be challenging to establish a new community. This difficulty is compounded with negative images of Iran and the general distrust towards the Middle East in the West. Politics and media portray Iran and the West as two irreconcilable forces. This has, to an extent, tainted the Persian identity of expatriates and their children with a sense of ambivalence and uncertainty. Where do we stand in the cultural spectrum? How do we construct an identity out of seemingly contradictory and ill-matched pieces.

These political tensions and cultural stigmas vanished the moment I saw the Iranian players racing after the ball, driven not by political motives, but following their lifelong passions. I knew their families were watching and cheering for them just as I was. I knew that they would be going home to the smell of saffron rice and freshly steeped tea and the lullaby of Persian songs and poems. This shared heritage and experience rekindled my cultural attachment, which grew to roaring pride as our team managed a draw with the Nigeria. As the stereos blared with Persian music after the game, amidst the cheering and joy, I pictured the millions of Persians around the globe celebrating at the same moment.

The World Cup offers a haven, a place in which Iran can exist on the same playing field as the other great nations of the world. It provides a moment in which Iran may present itself as an equal and its people may feel proud, not ashamed, of their country. Sanctions and nuclear talks all disappear as the face of Iran shifts, but for a few moments, to a spirited team pursuing their passion. Like a dazzling light piercing the clouds, this brilliant, yet ephemeral, image of Iran is one that we can celebrate and cherish. The supposedly fundamental contradiction between Iran and the West dissolves and we abandon our apprehension to embrace our heritage with pride.

It is not nationalism, or even patriotism, that inspires our cries of joy. Rather, we celebrate in solidarity with all those who share our culture, who were raised with Googoosh playing in their living rooms, whose carpets are nearly part of their family, and who bear a deep respect for our traditions. We celebrate our country without fear of being deemed closed-minded or conservative. We celebrate as a people.