Once the vital lifeline of the historic city, towered over by the majestic bridges of Isfahan, Zayandeh-Roud is now a dry, barren land devoid of life and its previous grandeur. Farmers who once cultivated crops around its fertile lands, now find themselves keeping the riverbed of Zayandeh-Roud clean and litter-free in order to make a living. 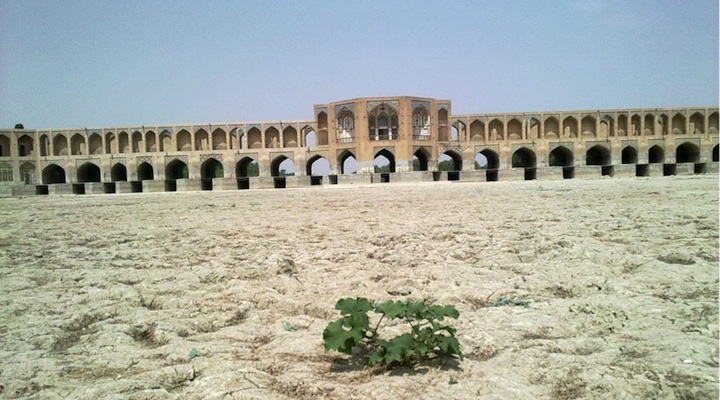 Much in the same way that the Seine has been the beating heart of Paris, or Thames that of London, for centuries Zayandeh-Roud or « life-giving river » in Farsi, has flowed through Isfahan from its source in the Zagros Mountains, west of the country. It has long been a source of subsistence and security for the inhabitants of the Isfahan province.

Isfahan is not, however, the only province of Iran suffering from an acute shortage of water. This summer, Iran experienced its seventh consecutive year of water crisis.  From the north-eastern city of Mashhad to the south-western province of Khuzestan, the draining of Lake Orumieh in the north-west and Lake Hamoun in south-east, all four corners of Iran have been plagued by an alarming water crisis, threatening serious environmental and human consequences. This summer, 12 major Iranian cities including Tehran and Shiraz, have been warned of the need for rationing should current levels of consumption continue.

According to the Isfahan Chamber of Commerce, the drying out of Zayandeh Roud means that about 2 million farmers in the Zayandeh-Roud basin have lost their income; that figure amounts to 40 per cent of the local population.  The Iranian government has offered compensation for the dispossessed farmers, but the compensation is a fraction of what the farmers earned previously.

Analysts estimate that tens of thousands of hectares of fertile land have turned into desert, and more than 500 million trees have died out in the Isfahan province as a result of the draining of Zayandeh-Roud.

Reacting to the plight of their local environment and economy, on 28th August, thousands of residents of Isfahan gathered in the riverbed of the Zayandeh-Roud.  In a peaceful protest, they demanded the government and provincial authorities to strengthen their efforts to bring Zayandeh-Roud back to life. But, not all of the protests arising from the water crisis have been similarly peaceful.

The episode bitterly showed the potential of the water crisis to escalate into an unsavoury regional rivalry over the scarce resource.

Although Iran only gets 200mm of rain each year, about a third of the global average, the current water crisis has much to do with mismanagement of resources. At 90 per cent, the lion’s share of Iran’s water resources is used up in agriculture, with inefficient irrigation and farming methods accounting for much of this usage. The excessive use of underground water supplies- which are difficult to replace- instead of using systems that conserve supplies has been a recurrent problem. According to the UN’s Food and Agriculture Organisation groundwater extraction almost quadrupled between the 1970s and 2000. At the same time, the widespread use of chemical fertilisers, which use up much more water than organic fertilisers, has led to more wasteful consumption. Some analysts believe, Iran’s heavy subsidising of water is largely responsible for encouraging wasteful consumption; the artificially kept low price of water means farmers take for granted what is in effect a precious commodity that is in short supply.

About two decades ago, Lake Orumieh located in north-western Iran was the Middle East’s largest lake with about 31bn cubic metres of water. Now only 5 per cent of it remains in place.  The rapid depletion of Lake Orumieh brought about by excessive groundwater extraction in the region and prolonged drought has enormous ecological and human consequences. Ghorbanali Saadat, the provincial leader of Western Azerbaijan has warned that the draining of the lake could lead to the displacement of up to 6 million villagers from the area, while the dispersion of salt in nearby farmlands could inflict serious damage to local agriculture. Classified by UNESCO as a biosphere reserve due to its rare species of reptiles and birds, the continuing depletion of lake Orumieh also risks the extinction of genetic diversity.

Iran’s current president Hassan Rouhani promised the revival of lake Orumieh during his presidential campaign. Upon taking office Rouhani’s government has launched a special programme known as the « Orumieh Lake Restoration Programme » composed of various environmental, geological and economic experts, as well as government authorities. The Programme has issued a 24-step initiative aimed at reviving the lake. The drawn up plan includes halting all dam building and groundwater extraction activities in the nearby region, transferring water from Aras river to lake Orumieh, as well as setting up 24-hour monitoring systems studying the lake’s ecosystem.

Tackling Iran’s water crisis is bound to be a costly and time-consuming effort: according to the estimate of the minister of energy, Hamid Chitchian, the restoration of lake Orumieh, could take up to 15 years, and will cost $4 billion.

But the cost of inaction may well prove more perilous.