This week a two-part exhibition curated by Yassi Metghalchi and Hessam Khalatbari at Galerie Nicolas Flamel in Paris, offers a rare glimpse inside the intriguing and highly secretive world of harems.

They had chubby cheeks, thick eyebrows and perhaps a faint of a moustache. The many wives and concubines of Qajar monarchs were well guarded inside large royal harems far from the sight of preying eyes.

The exact number of spouses of Fath-Ali Shah, the second Qajar monarch of Persia who reigned from 1797 to 1834, is not known but it is estimated to have been over a thousand. The harem was a highly hierarchical and well-organised institution, where the higher rank concubines and wives of monarchs enjoyed a separate estate with a large personnel of servants and eunuchs at their service. 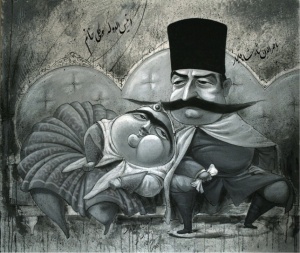 The internal organisation of the harem was often a source of friction between the wives, with designated activities ranging from managing the housekeepers, running the harem’s coffeehouse, and training the group of female dancers and singers who entertained the Shah and his wives. At the top of the hierarchy was the Shah’s mother, but other than that there was mobility within the ranks of women, making the harem a vital political arena, as well as a place of leisure for his majesty the King. 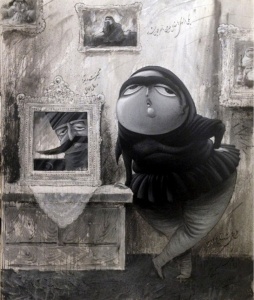 « A cartoonist inside a royal harem »

The first part of the exhibition is dedicated to the cartoons of acclaimed Iranian cartoonist and animation director Bozorgmehr Hosseinpour. Hosseinpour has worked as a cartoonist in reputable Iranian publications such as Golagha, Zan newspaper and Chelcheragh weekly magazine. He is now also one of Iran’s most active artists in the field of Iranian animation.

Having extensively researched life in harem from archived photos, Hosseinpour « secretly sneaks in Naser-al-din Shah’s harem » to offer a humorous, yet realistic portrait of the activities inside. The chubby faces of the women are often laden with anguish, while Naser al-din Shah is depicted with a stern, proud look on his face and a glorious long moustache.

The ladies in the harem also appear to have a sublime sense of fashion. Having been duly noted of their upcoming trip to Paris, they match their headscarves with French-style ballet skirts.

There are also interesting contemporary elements in the works of Hosseinpour. Cartoons featuring Naser al-din shah taking a selfie, and depictions of harem women with a nose job portray the forces of modern technology next to the constraints of tradition. 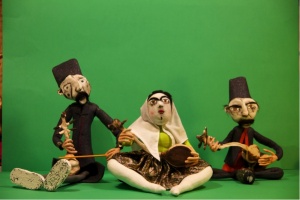 The second part of the exhibition hosts the works of Alireza Mirasadullah, an Iranian artist currently living in London. An established author, Mirasadullah has published 12 books of short stories, poems and novels, and is now predominantly working in the field of painting and visual arts. In the upcoming exhibition Mirasadullah presents his unique animation dolls (dolls constructed using animation techniques, ready to be utilized in motion format). 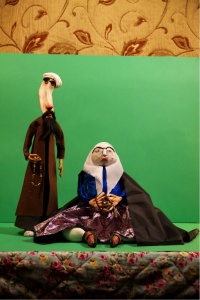 In this collection Mirasadullah skilfully crafts the different set of characters to be found in the harem: the Shah’s « favourite » wife, the musicians, the servants and the trusted religious figures permitted to set foot on royal harems. With an acute attention to detail and stylisation, Mirasadullah captures the intricacies of these characters. Humour also features heavily in Mirasaddulah’s work, both in the visual aspect and in the brief anecdotes accompanying the dolls. 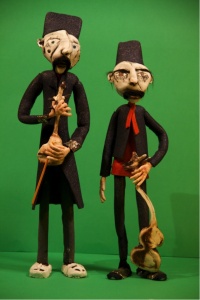 The picture to the right shows Jan Jan Khanoom, wife number 3 of the King, who is « so proud of her number », says Mirasadullah.

Visit Garelie Nicolas Flamel from 18-30 September 2014 for the full treat.

A campaign for social change lead by the women of Iran is taking social media by storm. The selfie has become a vehicle for political rebellion as women shed their hijabs and post their photos on Facebook.
Arsalan Fleury