Amidst the bustling, noisy streets of Tehran, an Iranian street artist known as « Black Hand » is attempting to depict the struggles and preoccupations of Iranian citizens. Street art becomes a medium for free expression in Iran’s capital. 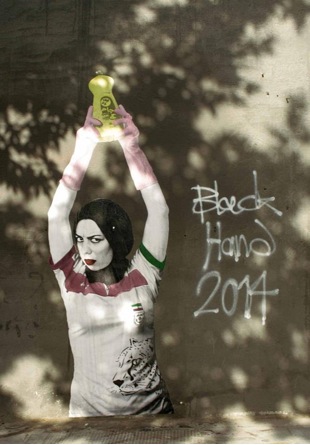 Graffiti art in Tehran, or in other Iranian cities for that matter, is not a new phenomenon, but the novelty of the street art by « Black Hand » lies in the presence of socio-political themes in his work.

In Tehran, as in most cities worldwide, graffiti activities are illegal but have emerged as a new form of art. Yet, what distinguishes the work of « Black Hand » to its counterparts in Berlin or New York is the Iranian socio-political context. The desire for social and political reform prevalent amongst many young Iranians, add an extra layer of meaning and urgency to the work of “Black Hand”. Below are a few samples of his work throughout Tehran:

The picture above shows a woman wearing Iran’s football kit at the 2014 World Cup in Brazil while lifting a washing liquid. Her posture is reminiscent of players lifting a trophy, yet she wears a disgruntled expression on her face. Female footballs fans in Iran have long been banned from entering football stadiums, and in June – coinciding with the World Volleyball League matches – women were banned from entering volleyball stadiums as well. In response to protests against the ban, National Police Chief, General Esmail Ahmadi Moghaddam, said it was not yet « in the public interest » for men and women to attend such sporting events together.

The above painting shows a pair of hung boxing gloves alongside the words « enough fighting, continue with diplomacy ». The work refers to the on-going nuclear dispute between Iran and western powers and was first seen in July 2013, shortly after the presidential election victory of Hassan Rouhani on a platform of reconciliation and diplomacy with the west. By the end of Ahmadinejad’s second-term as president, tensions between Iran and western powers had peaked, and the new set of sanctions following consecutive failures in nuclear negotiations were taking a heavy toll on middle and working class Iranians. 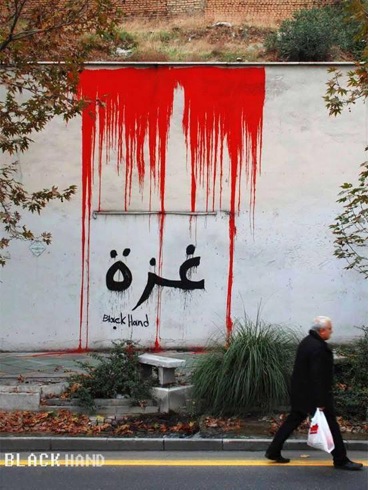 The above graffiti portraying bleeding over the word « Gaza » appeared in Tehran during the November 2012 Israeli invasion of Gaza and was once again revived on social media in July 2014, following Israel’s renewed assault on Gaza. During protests that followed the June 2009 presidential election, some Iranians spoke out against the alleged overzealous support of the Islamic Republic of Iran for Gaza, whilst considerable social and economic problems persisted at home. Sympathy for the Palestinian cause may have dwindled somewhat during this period among some Iranians. However, with the above graffiti, « Black Hand » sends the message that all human atrocities should be condemned regardless of where they take place.

Perhaps the bleakest work yet presented by « Black Hand », the painting above alludes to the thriving black market in the sale of kidneys in Iran. The work was portrayed next to a clinic in central Tehran in late July, and according to witnesses, it was erased off the wall immediately overnight. Iranian law permits the sale of organs for transplanting, provided that it abides by the required medical procedures. 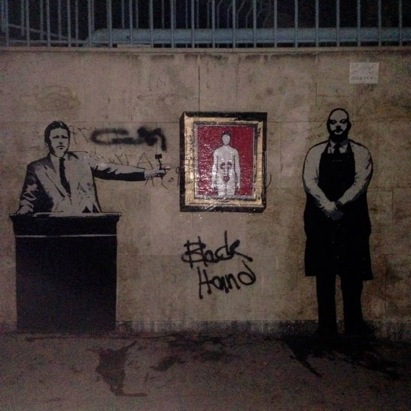 Many desperately poor people sell their kidney in return for reimbursement, however, illegal « fixers » have rose in the trade in order to “facilitate” the transaction between donors and receivers. A few weeks prior to the appearance of this portrait, Iranian doctors reported the trafficking of kidney from Iran to patients in Gulf countries.

The strength of the street art by « Black Hand » is its ability to expose sensitive social problems by projecting them in public spaces. Since some of these issues cannot always be openly discussed in the Iranian media, street art can serve as an effective medium for self-expression and for increasing public sensitivity to these issues.

Just as Iranian cinema has done in its own way, street art belongs to these spaces of freedom that Iranians have succeeded in creating. But above all, these portrayals powerfully recount the experience of life in Tehran.