Designation of the President in Iran: some true facts… Editorial by Michel Taube

Discover the FR, ENG and PERSAN versions of this article.

Since 1978 and the Islamic revolution in Iran, the world has returned to a new medieval era where Islamic theocracy is trying to conquer the world. Today, Friday 18 June, what was supposed to be an election will be the designation by the caciques of power of a new president, ultra-conservative.

The ultimate twist: 210 Iranian parliamentarians have just signed a manifesto asking the five remaining candidates to withdraw in favor of Ebrahim Raissi, the ultraconservative head of the Iranian judiciary and vice-president of the Assembly of Experts. He played a key role in the massacres of political prisoners.

The turnout will hit record low level! Meanwhile, Iranians are developing treasures of ingenuity to resist (#No to the Islamic Republic – نه به جمهوری اسلامی) and to live a normal life despite everything. Hence the title of the #Normal_Life campaign launched by Ali Ebrahim Zadeh, a young Iranian immigrant living in the United States. He compared the quality of life standards in Iran with those in the so-called « normal » countries and concluded: « This life that the Iranian people live is not normal! Every freedom, every opportunity that has been taken away from them is part of their fundamental rights! «

Ali Ebrahim Zadeh had a giant poster displayed in Manhattan near the New York Times headquarters. We adapted it to assert: « Citizens of Iran, we are not forgetting you! » 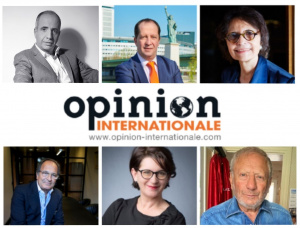 Iran and P5+1 countries appear closer than ever to a framework agreement over Iran’s nuclear programme before the decisive round of talks resumes on Wednesday, yet important differences could still curtail the marathon talks.