Opinion Internationale met, on the 30th of June, Ms Kersti Kaljulaid, President of the Republic of Estonia, to talk about democratic and digital issues and the conditions that give birth to a “startup nation”. 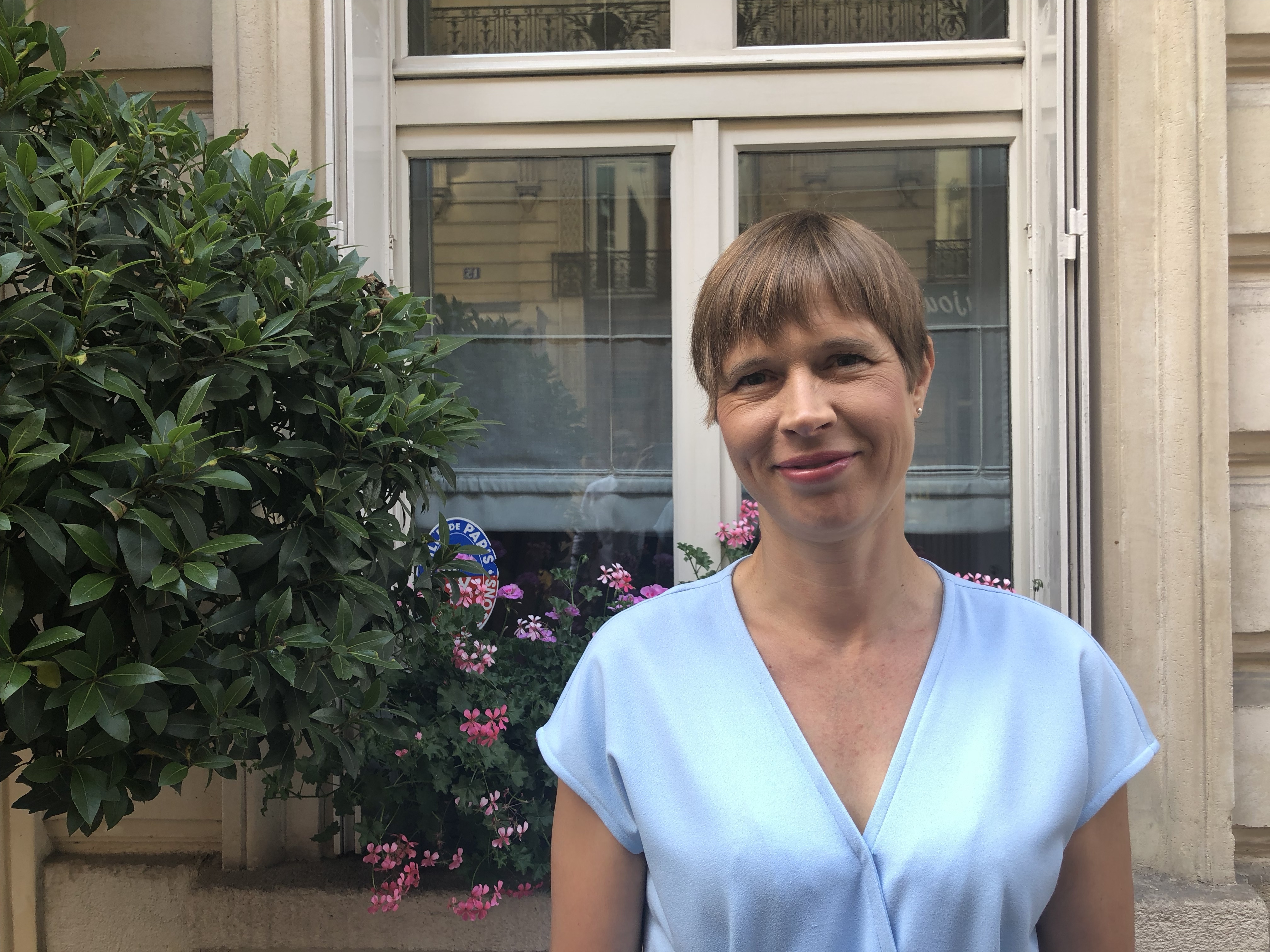 A crucial summit took place in Brussels on thursday and friday, and the migrant crisis was high on the agenda. Do you think that the EU is about to collapse, because of this crisis ?

Definitely not. Simply because there is no better alternative to the European Union. Let’s imagine ourselves trying to solve the crisis without the opportunities of mediation offered by the EU, what would we do? It would take a considerable amount of time to find a common solution.

Even if we have difficulties, the EU remains the best guarantee to solve the crisis. And that’s what the EU is about.

On the migrant crisis, does Estonia lie more on Macron and Merkel’s side or on the Visegrad group’s side (Hungary, Czech Republic, Slovakia and Poland)?

We’ve always participated to the integration of migrants. At the very beginning of the crisis, we respected the engagements set by the President of the European Commission Jean-Claude Juncker.

As soon as the decision to act in solidarity with each other was taken, we immediately started to build our own integration system, with the notable help of Greece, which already had infrastructures and its own system.

Besides, we must inform the migrants of the situation of our country : small, not dense and with a tough climate. And even if we offer a good social security system, our wages, especially in the blue-collar sector, are not as high as in western Europe for example.

From a constitutional point of view, you are the President of a parliamentary republic, where the major powers are in the hands of the government and the parliament. In Italy, where the President has quite the same powers than you, Mr. Sergio Matterella has recently played an active role in the establishment of a majority. Do you think that in such hard times, a President of the Republic has more duties and responsibilities ?

Every country has its own constitution. In Estonia, the electoral system obliges us to form coalitions to govern. And the latter are really hard to establish. My role, as the President of the Republic, is to make sure that the Prime Minister has a majority in parliament. And if ever there is a government change, I am of course very involved in the discussions, even though I don’t take part to the elaboration of the coalition.

I used to work for the european institutions, and in Brussels, in order to be heard, one must convince the commission but also the parliament. In this environment, i got used to debates and democratic discussions. So it’s in my nature, and in the nature of my country’s constitution, to make sure that all the point of views are heard and the discussions are framed.

Furthermore, I’m deeply attached to my country’s institutions because I believe that in Estonia, no one can take a decision alone.

And by the way, one of the reason why our constitution is so good in terms of checks and balances is because it hasn’t been written by a lawyer but by a Soviet Union dissident. A man who had a real democratic instinct, and the communist experience in mind.

Fifty estonian soldiers are on their way to Mali, where they will join french troops. What does this decision reflect ?

Estonia doesn’t want to be perceived as a country which only consumes security, whether within NATO or the EU. We’ve been independent for 26 years now, and we’ve been actively participating to peacekeeping missions for 23 years. We are in Lebanon, Afghanistan, Irak for example. Through those actions, we want to show the world that we act in solidarity with our allies and that we are active on those issues.

Concerning Mali, we know how hard it is for France to be out there, and that’s why we proposed our help, which has been accepted.

I believe that when Estonian citizens read the history books, they understand how important liberal democracy, Human Rights and the international law are. Those values are existential, especially for a small nation like ours.

The history of the past century has shown that things turn bad when those values are violated. That’s why commemorations are important.

If I say that “Estonia is a wooden house, 100% connected”, do you think that it describes your country well?

Estonia is gifted in terms of nature. We have great forests and a wonderful coast. But a wooden house, I don’t think that it describes my country very well.

100% connected, indeed ! A lot of our citizens are living in the middle of the countryside whilst being very connected. And I believe it’s a great opportunity, especially for the next generation, that nowadays one can work from wherever one is.

At the same time, it raises the question of how we organize our social system. If our citizens create value outside of our country, how should we set our tax system ? That’s actually a question that we’ve asked to the EU institutions when we had the presidency during the second semester of 2017. And together, we thought about our future social system. One that will embrace technological breakthroughs. 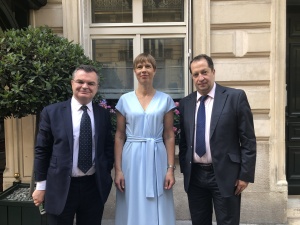 Estonia :  the country of unicorns

“There is not a single small country like ours which can boast having given birth to four unicorns”. That’s how Kersti Kaljulaid, the President of the Republic of Estonia, recalls that her country, situated in the Baltic region and member of the European Union since 2004, is unanimously recognized as a reference in terms of digital entrepreneurship and e-administration. Those unicorns are not mythical creatures. They are real, and each of them has a valuation over one billion dollars. They are called Taxify (Uber’s competitor), Skype (service of video messaging bought by E-bay for 2,6 billion dollars and sold to Microsoft for 8,5 in 2005), Playtech (e-sport) or TransferWise (company of peer-to-peer international money transferring). They all come from Tallinn. They prove that the decision to embrace the digital transition at an early stage, taken by the Estonian State in the 90s, has been a great success.

The President of the Republic explains it :“If today Estonia is recognized as a “startup nation”, it is thanks to the economic and legal environment that we have implemented. And we strived not to over-regulate to let thousands of startups grow. At the same time, we made sure not to abandon our sovereignty to the technological actors that have accompanied the transformation of our country. Thanks to this policy, which relies on the primacy of the State over technological breakthroughs, Estonia has been able to keep control over sensitive issues, like algorithms and personal data.”

Since 2002, every Estonia citizen has a digital identity card, which gives him the access to all the “e-public services”. Besides, all the students and teachers have been taught how to use new technologies. As a matter of fact, the Estonian bet hinges on the responsibilisation of citizens and the trust towards the State, which is a digital third party.

The digital future of Estonia is written in blockchain

Launched in 2014, the e-residence program is an initiative designed to attract entrepreneurs from all over the world. This status, to which any foreigner can apply on the internet to become an e-citizen and be able to create a company and open a bank account, has made Estonia’s strategy of the 90s, called “X-road program”, famous.

This ambitious program of digital transformation of the society has enabled Estonia to present its administrative e-services beyond its borders, showing the world that digital technology can be a solution to simplify governance and bureaucracy. It’s a reason why today, France and Estonia have close relationships: “on the issues of the digitization of the administration, President Macron and Mounir Mahjoubi know that Estonia is an interesting laboratory, our two countries work hand in hand on those subjects”, adds Ms. Kersti Kaljulaid.

The country has planned to go even further, with the creation, as of January 2019, of a “digital nomads” visa, to urge people to settle in Estonia for one year. With a wi-fi network available all over the country, it’s quite easy to telework.

“If we had to rethink the X-road program, which enabled us to become a true digitized state, there is no doubt that we would leave intact the project’s architecture, aimed at digitizing the country to serve the citizens. Today, we continuously keep on adding new services to the backbone that X-road is. Nonetheless, I am quite certain that, in the future, we will rely more and more on new promising technologies, such as blockchain. Even though we already have systems of electronic signatures to vote or to go the the doctor, this can all become more secure and transparent with the blockchain technology. I would add that these technologies will also facilitate cooperation between countries. For example, we have strong relationships with Finland and Iceland, two countries with which we have established strong technological partnerships, to share public data in order to enhance public services. But it’s important that these technological advances are done with the private sector. Public-private partnerships are indeed essential, as we can benefit from one another and develop new solutions and test them quickly.”

On Saturday the 30th of June, Kersti Kaljulaid was the guest of honor of the Sciences Po graduation ceremony. The Estonian President delivered a message of hope to students: “machines ought to be more and more performant, but they will never be as intelligent as mankind. Our world is starting to prepare to those massive changes, but let’s say wakeful.”