While the civil war in Syria is leading up to its third anniversary and the Geneva II talks ended up unsuccessful, Syrian women appear to be the most affected population, at all levels. Indeed, their situation is overlooked regarding the catastrophic humanitarian situation in refugee settings, the restrictions on women’s rights by some rebel groups and the absence of women from the negotiations table. 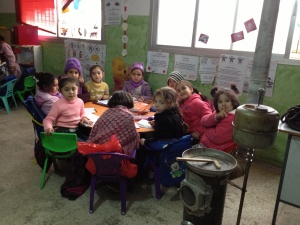 Everything is lacking in Syrian refugee settings

Last December, the United Nations called for 6.5 billion dollars in order to provide the 2.5 million Syrian refugees scattered over Lebanon, Iraq, Jordan, Turkey and Egypt with basic commodities such as food, thermal blankets and health kits.

Most of the refugees do not live in formal camps organised by humanitarian agencies. Instead, they either compete with host populations in finding apartments and jobs in the cities, or they live in shacks they built themselves in de facto refugee camps, where they lack electricity, water, etc.

Moreover, Amnesty International has reported last year’s arbitrary arrests in Egypt by military and police, along with prolonged detentions of Syrian refugees as well as impunity for the perpetrators of violence against them. Media outlets exacerbate this climate by spreading a xenophobic discourse, accusing them of supporting Mohamed Morsi, former president of Egypt.

As Nicola Pratt, expert on women in the Middle East, explained: “Mohamed Morsi, with the Muslim Brotherhood, was very supportive of the Syrian opposition; and the majority of the members of the Syrian National Council are Syrian Muslim Brotherhood. So when Morsi was overthrown, a discourse in the media started to associate Syrian refugees in Egypt with Morsi, basically saying that these Syrian refugees are part of trying to get Morsi back into power. This has been a particularly hot backlash against Syrians.”

Another trend in Egypt and in the other neighbouring countries of Syria is the widespread sexual violence, particularly against women and girls, as the International Rescue Committee reported in 2013. They are the most vulnerable population in times of conflict, and the economic hardship that these countries face does not help women support themselves – since a lot of men have stayed in Syria to fight or have died. This situation explains their resorting to child marriage and prostitution.

Nonetheless, host populations try to help the refugees. In the Bekaa Valley in Lebanon, Nimat Bizri is one of them. Since the beginning of the Syrian uprising, she has mobilised her circle of friends to raise money and offer jumpers to Syrian refugee children. Over time, “We provide them with food and clothes, mattresses, everything they would need,” she said.

She recalled how she and her friends founded a school that applies a Syrian curriculum so that Syrian refugee children can have an education free from political and religious teachings. The school has now 650 children. But because of lack of space, it can only be a secondary school; it had to send the youngest children back to the streets.

Hence Bizri’s latest project is to bring school into the camps. “We have built six tent schools in six different camps,” she pointed out proudly, before adding, “It is very practical: the children are already on site so they don’t need transport, and it is very convenient for the parents, as the children are there with them and they can study.”

She also stressed how they can use these tent schools to teach the mothers in the afternoon to read and write, which is vital in this situation where women have often become heads of the family.

Meanwhile, women stayed in Syria are experiencing their own kind of trouble. In addition to an increase in gender-based violence – an unfortunately common phenomenon in conflict-torn regions – Human Rights Watch has documented violations of women rights in the public space.

“The refugees interviewed said that the extremist armed groups Jabhat al-Nusra and the Islamic State of Iraq and Sham (ISIS) have enforced their interpretation of Sharia, or Islamic law, by requiring women and girls to wear headscarves (hijabs) and full-length robes (abayas),” states the report, published last month.

According to Pratt, this backlash on women’s rights can be explained by opposition groups’ will to differentiate themselves from the incumbent regime when there is a breakdown of central authority. Although the cause was different, related to the US-led invasion, a similar phenomenon happened in Iraq.

Both in Iraq and Syria, it can be seen that “previous regimes portray themselves as being secular and relatively progressive when it comes to women’s rights – at least they openly promote the idea that women should be part of public life, part of national development, of national affairs,” Pratt said.

She continued, “So when you have opposition forces, wanting to demonstrate their ideological differences with these regimes, then gender is quite an important part of that differentiation process.” This explains the “backlash against the secular modernising discourses about gender [which Assad’s wife embodied] and instead, an emphasis on a conservative, Islamist-oriented discourse about women and men’s roles, which says that women should go back to the home.”

Men’s rights also suffer from this backlash as they are just as much requested to comply with an Islamic behaviour. Not drinking alcohol, having a beard and dressing a certain way… are some of the codes of conduct that Islamist groups apply to men, while they restrict women’s right to go out freely and to get an education.

Pratt recalled the Iraqi situation in 2005, where extremists groups forced barbers to shut their shops, as they were shaving men’s beards in an un-Islamic way.

The end of the conflict would probably not help to improve Syrians’ situation in this matter, since a new regime would, again, insist on showing its differences from the previous one, including in terms of gender ideology.

Pratt pointed out that women’s rights are in jeopardy in Syria on the long term because “I don’t think we could discount the idea that Syria will end up being divided in a de facto way – if not a de jure way,” she said, adding that different authorities governing one state will, if it happens, create tensions and have a negative impact for the equality of all citizens, and especially for women’s equality.

The most remarkably absent actors of the negotiations

Nonetheless, Syrian women have been active in society under Assad’s regime, and many women are now involved in the non-armed opposition. As such, Pratt declared that they “are not just passive victims, they are taking this new opportunity to mobilise and demand their rights, in what might come out of this conflict.”

Adopted in 2000, the much-acclaimed UN Security Council resolution 1325 requires women’s involvement in peace processes and their participation in decision-making levels in conflict resolution. Too loosely implemented, this resolution has been backed last October by resolution 2122, which draws a clear set of measures to see more women included in peace negotiations.

They however don’t seem to be of much effect, as women have again been absent from the Geneva II talks regarding the future of Syria – even though Special envoy Lakhdar Brahimi succeeded in gathering representatives of the regime and of the opposition groups at this conference.

While Barbro Svedberg, Project Manager at the Women’s International League for Peace and Freedom (WILPF), recognised that both the opposition’s and the regime’s negotiation team have women in their delegations, she warned, “that does not necessarily mean that there will be a women’s rights or gender perspective in the negotiated item.”

Along with the umbrella women’s organisation Madre and the grassroots movement Code Pink, WILPF is strongly advocating for involving women in the Syria peace process. They argue that the first measure should be to appoint a Senior Gender Adviser to Brahimi’s team of advisers, in order to apply a gender mainstreaming analysis to the negotiations.

“The women’s organisations analysed the Geneva I communiqué and provided a gender analysis, which highlighted the necessity of having a gender analysis when it comes to the humanitarian issues, to the ceasefire, to the local peace agreements, to the prison detention issues,” Svedberg underlined.

Given the inability of the UN and the member states that addressed the question of women’s non-inclusion to give them a proper seat, the women’s organisations are asking for a consultative status, in order to at least be able to provide their analyses of the decisions. In Homs for instance, they are afraid that the evacuation of women and children conducted last weekend might lead to a massacre, as Assad’s regime could easily claim that the city is full of rebel fighters and empty of civilians.

More than being issued, these gender analyses need to be taken into consideration in the conflict resolution process. Women’s organisations also want to ensure women’s rights are upheld at the negotiation table, to guarantee Syrian women a future not as grim as the one currently unfolding before them.