For the past year and a half, the local Costa Rican association Community Carbon Trees has set up a programme specifically devoted to women. Close to 50 women now contribute to the development of the association which replants different species of trees to improve biodiversity. They sell fertilisers to the association that they have made themselves using grass, waste from their houses, ashes, excrements, etc. Jennifer Smith, founder of the association, explains how women tend to involve their children in their work, and in this way, raise awareness throughout the whole community on biodiversity and environment protection.

This, in addition, allows them to be more financially independent which, in turn, improves their self-esteem and motivates them to work with more energy and good humour. Husbands are also happy about this programme and admirers of the work their wives achieve. Hence, not only does Community Carbon Trees contribute to a healthier environment but also plays a positive part in the balance of the community.

Opinion Internationale: At Community Carbon Trees (CCT), is the main focus of your work on environment or on the community?

Jennifer Smith: I really think that the two are holding hands. CCT definitely works a) for biodiversity, because we are planting so many different kinds of trees (65 different species); and b) for climate change, because the trees are capturing large amounts of carbon dioxide, protecting water supplies and balancing the rain cycle. Now, the way we are doing it is through community action. We just got the non-profit status, which in Costa Rica is more appropriately called ‘community-based organisation’. This has enabled us to organise more fundraising – through the philanthropic organisation Global Giving – and to get awarded a United Nations Development Programme small grant for $20,000 from the Global Environment Fund. This money is going to help us grow our tree nurseries, expand, have support to build better and bigger infrastructure, and to receive more public volunteers, in the form of ecotourism tours in Costa Rica – it is very much related to our educational mission.

Can you explain CCT’s programme for women please? How did it start?

It started a year and a half ago, when I realised that there were so many women in this deforested valley with nothing to do. They would come to the tree nurseries and bring up seeds and ask me for jobs. Then I found a woman in the area, Ms Lopez, who proved herself to be a very good leader; with this leadership within the community, we gathered 44 women and we got a small grant from the Costa Rican Ministry of agriculture. With this money we had several capacitation classes about composting. The women got very excited and started composting and walking along the rivers, picking up the cow poop. With the cow poop, their garden waste, their kitchen waste, chopped grass, wood ash and different kinds of animals droppings, they started making the black dirt with the skills they learned in these capacitation classes. Now Community Carbon Trees is buying the black dirt from them to use in the nurseries, and I also go around and sell the black dirt to private buyers. It was a way to start a business with the women and create, not only an income, but give them something to do. And these women are so excited about it; they just do not stop.

We also have seven women on the planting crews (out of 24 people) and again, you can just see how excited they are and how good they feel about themselves. They are able to make a little extra money with this, they have something to do, and I think they all have a whole lot better self-esteem. We keep having families contact us to participate in the programme, to help us come and plant there, but also to participate in the work crews and in the nurseries.

Who did collect the black dirt before the start of the programme?

Men did it, but we had not created a business out of it. We always needed the black fertile dirt for the nurseries, and it was just, basically, part of working in the nurseries.

But then we figured out that it could be a good way to have a business from it and that it was perfect for the women to do. We buy every sack of black dirt from the women for $5, so they are definitely making money. I bought from them probably 400 sacks of black dirt in the last year, and this will continue to grow as we expand.

But obviously, the men are hugely necessary; there is a lot of heavy chopping and heavy lifting that we need them to do. So I think that it is really a good collaboration that the men and women are working together, each doing a somewhat discreet part of the whole reforestation process. 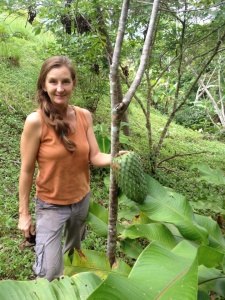 How did the husbands react to these new activities?

They love it. It is interesting, because at the beginning I wondered whether the husbands would get upset that the women are active like that. But the women said that their husbands love the fact that they have their own extra money and that they can contribute. One woman told me last week that she felt so good to pay the bills at the grocery store with the money she made from working on the tree crew and working with the black dirt crew. And she said that her husband was thrilled.

Lots of times the women also bring their children with them; they will go with them along the rivers and collect the cow poop. So I think it is something that the families are involved in, including the kids, and this is great.

According to you, what is women’s role in the fight for sustainable development?

I think the women are crucial for climate change and in our whole programme, because they have such an influence on the children. The women working with us are more likely to discuss climate change or reforestation at the dinner table than men. Indeed, I think the men would come home from work and not talk about what they were doing very much, because it seemed sort of normal that they were chopping and working in the fields. But it was not so normal for the women. So when they started doing it, being so happy and excited, they started talking about it more. It just seems that they are having conversations now within their families, about composting the waste and not throwing herbicides into the river – because we do not use herbicides, which are a real problem in Costa Rica. I think that we are able to do a lot more education through the women, than we were able to do through the men, because they are more involved with the children’s education down here.