From the Vendredi 13 Collection, this novel tells how Julien Makambo, a young Congolese, freshly arrived in Paris settles under a new name as José Montfort. He is welcomed by a member of his family, an important figure of the Congolese milieu in Paris. Julien/José discovers the SAPE world and the underground schemes, but one night, he witnesses a murder and everything falls apart…

Beyond the Vendredi 13’s concept – day where everything collapses for the characters – Alain Mabanckou opens the doors of a little-known Parisian universe: the African community and the congolese’s SAPE (Société des Ambianceurs et des Personnes Elégantes). . 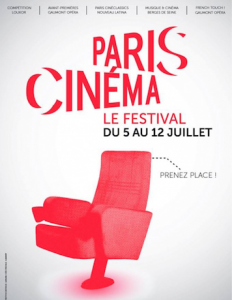 Until July 12th, Paris honours the 7th art through the Festival Paris Cinéma.

What’s on? Previews, the « Paris Cine Classics » at the Nouveau Latina – to discover great classics for the first time or all over again -, open-air movies as well as the cinematographic « French Touch ».

Well worth listening to! 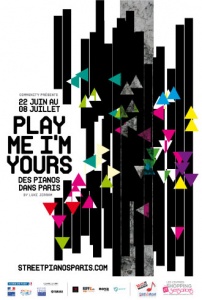 « Play me I’m yours » is back in Paris and this is the last week you can enjoy it! 50 pianos personalised by French artists and available in several places.

This concept created and initiated by Luke Jerram in 2008 has now conquered several countries. This initiative is primarily about making music an art accessible to all of us without distinction and creating a moment of sharing between people, pianists and passers-by.

It’s also a humanitarian engagement: the 10th of July all pianos will be brought to different social structures (the Mie de Pain, Hospitals, Schools, …) to bring music to people in need.

How about going out this week?

How about going back in time? Until September the 8th, this is what the Centre Pompidou and the Grandes Halles de la Villette actually offers you !

You will have the opportunity to relive the « Magiciens de la terre »’s exhibit which took place 25 years ago in Paris. The specificity of this exhibition was the fact that creations from artists from all around the world were associated and presented in a magical way, creating a unique « unbelievable » and – without borders – atmosphere . 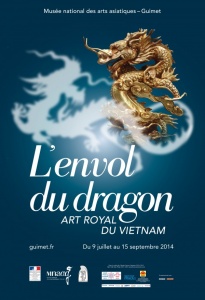 This week begins an exhibition dedicated to Vietnamese royal art. The national museum of Vietnam in Hanoi lent to the Guimet museum several ancestral objects for the 40th anniversary of the establishment of diplomatic relations between France and Vietnam (dating from the Bronze Age to the time of the last royal dynasty).

As a symbol of royal prestige, benefactor and guardian of society, the dragon is a central figure to the exhibition. It can be found on artwork as well as on funerary furniture and imperial objects.

So, go and discover Vietnamese culture and its most potent symbol, the dragon, at the Guimet Museum!