The world in 50 words 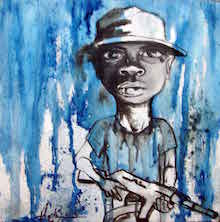 In smoke and noise, he seized us, thrust assault rifles into our trembling hands. We were young. In two years he won the struggle and became president. But I hadn’t been paid. My buddies neither. We still got the rifles and we’re not going away. He’s old, but we’re sixteen.

The world in 50 words by Will van der Walt

The world in 50 words is a maverick, a flash saga, a fugitive amongst forms, but when light breaks, the face is clear. The intrigue of a short story, the seed of a novel, the taste of poetry, the pimento of haiku – There … think that should be fifty.